Snaps
Spiced spirits is primarily a Scandinavian phenomenon. The custom of spicing spirit, began in the 16th century,  at that time only  for medical reasons,. Today it is all about he taste., and to enhance taste of food. Snaps is, almost always, a drink that is consumed together with food.
Even a clear, unspiced vodka, can is considered a snaps if it is consumed like a snaps.

The largest group of spiced spirits is aquavit, where caraway and / or dill must be included. Other spices are allowed, but the former will dominate the taste. Norwegians prefer to spice with only cumin, and they also age the aquavit in sherry barrels. Among the Danes, aging in barrels is unknown. They almost slavishly uses dill and cumin as a spice. But  instead the like to increase alcohol content a few notches.
Swedish and Norwegian aquavit is usually about 40% of 80 proof.
Danes can pop it up to 45-50% or 90-100 proof.

In Sweden they make a lot of different aquavit,  a small part of production is aged in barrels.  Swedes also produce a lot of other spiced spirits, using  Bog Myrtle, St. John’s Wort and Bitter Orange.
A peculiar flavor of brandy is wormwood, which has a very bitter taste. Bitter snaps has its loyal lovers as well as haters. Anyway, it works well to serve it to the smorgasbord, although the bitter flavored snaps, may take precedence over the taste of the food, which is why it sometimes finish last as a digestif. 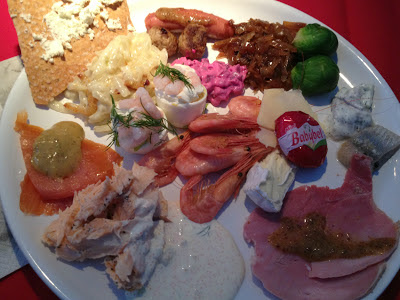 At last, both the Swedes and the Danes love to sing a special snaps song before drinking the snaps. This ritual is as old as it is to drink alcohol for celebration.
Here is Will Ferrels take on it….

Even the Finnish people can drink aquavit and sing while they have a party….

This article is partly based on, translated from, Swedens Systembolaget’s  article